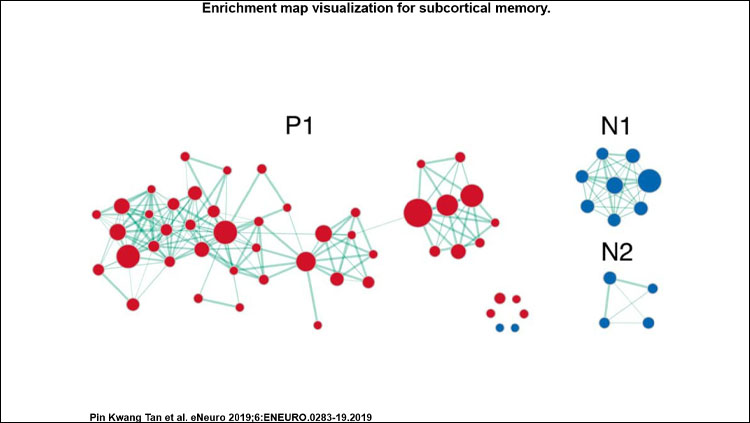 Material below summarizes the article Distinct Genetic Signatures of Cortical and Subcortical Regions Associated with Human Memory, published on December 9, 2019, in eNeuro and authored by Pin Kwang Tan, Egor Ananyev, and Po-Jang Hsieh.

Memory function is crucial for everyday life, ranging from spatial navigation to information retention. The anatomical and functional aspects of human memory are well characterized, owing to neuroimaging and case studies of brain damage. However, despite the knowledge that memory ability is heritable, a comprehensive view of the genetics of human memory remains lacking.

Here, we analyzed the three-dimensional spatial distribution of gene expression across memory regions to identify such gene signatures of human memory. Despite a common involvement in memory, we found that cortical and subcortical areas have largely distinct genetic signatures. Genes shared between cortical and subcortical signatures are involved in regulating transcription and synaptic plasticity, hinting at fundamental processes in memory. We further identified genes with novel links to memory, such as neurogenesis-related MIS18BP1. Overall, our work provides an unprecedented insight into biological processes and genes associated with memory, and proposes candidates for further experimental investigation.

To identify genes associated with general memory, we first applied a spatial correlation method on a gene expression map (Allen Human Brain Atlas) and a neuroimaging map (Neurosynth memory map), separately for cortical and subcortical memory areas. For each gene, this correlates gene expression level and z-scores of the memory map across the brain, where a high z-score suggests that the brain area is highly relevant for memory (e.g., hippocampus). Genes with a high correlation value are likely related to memory. This produced a gene list of ~16k genes and their correlation values per analysis.

To identify genes and biological processes related to cortical and subcortical memory in an unsupervised manner, we used bioinformatics tools to identify candidates from the gene lists above. To identify cortex- and subcortex-specific genes, we identified non-overlapping genes between their profiles. We validated our results by verifying that the memory gene signatures agreed with animal literature.

At the biological process level, we found differences in cortical and subcortical memory. Cortical processes include epigenetic regulation and immune signaling. Immune signaling received recent interest as an important factor in the onset and development of dementia. Subcortical processes include neurogenesis and glial cell differentiation. Dysfunctional glial-mediated potassium homeostasis and myelination was recently linked to memory deficits.

We found that the method was highly effective, as the probability of obtaining the number of memory genes observed was significantly above chance. The method is also specific, as it identifies more genes associated with the cognitive function analysed than for the control function (e.g., memory and motor function).

We show for the first time that cortical and subcortical regions involved in human memory possess distinct genetic signatures. These gene signatures are in agreement with prior research and were dissociable from a control function (motor function). Lesser-understood biological processes and genes may guide future experimental investigations in human cortical and subcortical memory function and disorders.

Presently, human memory evidence is mainly derived from popular non-invasive methods such as GWAS, which identifies gene variants related to brain or behavioral measures of cognition. However, these methods do not account for the spatial pattern of gene expression in the brain. Our approach relies on this spatial pattern and identifies genetic signatures related to human memory. Crucially, our human-centric, unsupervised approach is versatile, as it can reveal insights into any cognitive functions that are clinically relevant but with a genetic basis that is less understood (e.g., language, as in the case of dyslexia).

Egor Ananyev, PhD
Egor Ananyev is a research fellow in the department of psychology at Nanyang Technological University. He obtained his PhD from the National University of Singapore.

Po-Jang Hsieh, PhD
Po-Jang Hsieh is an associate professor in the department of psychology at National Taiwan University. Po-Jang Hsieh obtained his PhD from Dartmouth College.
﻿