Cortical and Hippocampal Contributions Throughout Skill Learning in Mice

Material below summarizes the article Differential Involvement of Three Brain Regions During Mouse Skill Learning, published on August 1, 2019, in eNeuro and authored by Aldis P. Weible, Michael I. Posner and Christopher M. Niell. 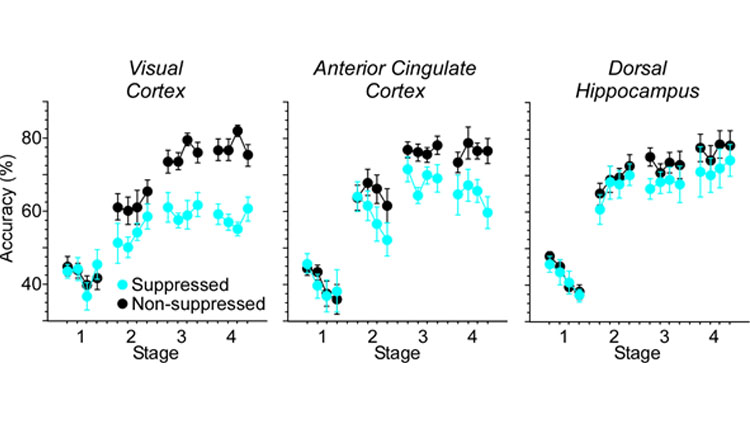 In 1967, Fitts and Posner proposed that human skill learning progresses serially through cognitive, associative, and autonomous stages characterized by increases in accuracy and decreases in reaction time. This influential three-stage model continues to receive significant experimental support (e.g., Tenison and Anderson, 2016). However, it remains unclear how this progression maps out in the brain.

Do different regions contribute primarily during specific stages, or do they function in parallel as the individual progresses toward mastery? We examined this question in a mouse model of skill learning by suppressing activity in three different brain regions during each of four training stages and assessing the impact of these manipulations on performance. The first three stages were characterized by changes in accuracy and reaction time and therefore approximated changes in performance associated with each stage of the Fitts and Posner model. The fourth stage enabled testing of a pair of methodological control experiments.

The task was a visual-spatial discrimination in which mice on a spherical treadmill learned to associate cue position (top or bottom on a vertically oriented computer monitor) with direction of movement (left or right) for a water reward. Suppression occurred on 20% of trials during the first four days of each performance-defined training stage. Accuracy, response bias, and reaction time were assessed using nonparametric analyses.

Human skill learning is characterized in part by changes in accuracy and reaction time (RT), averaged over trials and subjects, that fit a power function. Control mice that did not undergo suppression during the first three stages of training exhibited changes in RT over time consistent with this pattern. Suppression of V1 significantly decreased accuracy and increased response bias, the innate preference for movement in one direction regardless of cue position.

A small yet significant increase in RT was also detected. Suppression of ACC produced effects on performance and bias that, while somewhat smaller in magnitude, mirrored those seen with V1 suppression (no effect on RT was seen). Suppression of dHC modestly reduced accuracy but had no effect on bias or RT. Consistent with the human literature, RTs were longer on correct trials following an error versus following a correct response. Suppression in all three regions enhanced this effect, though the specific stage(s) in which the influence of suppression was seen varied by region.

It is possible that the nature of the contribution made by ACC and dHC changes across stages. For example, the ACC is involved in attention and top-down control enabling cognitive flexibility but has also been implicated in recall of remote memories. Future work targeting specific input-output pathways and using viral-insertion of the same types of light-sensitive opsins used in the present study could enable further dissection of the neural circuitry mediating skill learning.

Aldis P. Weible, PhD
Aldis Weible is a senior research associate with the Institute of Neuroscience at the University of Oregon.
﻿