Are Fish Hippocampal-Like Networks Functionally Similar to Their Mammalian Counterparts? 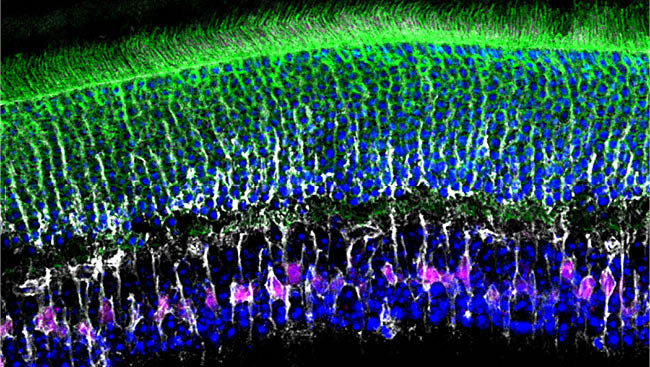 Efficient foraging requires that a fish remembers where its prey is located with respect to environmental features. Thalamic neurons in fish can encode the time interval between salient encounters. This information is transmitted to DL.

Theoretical studies suggest encoding of time intervals requires activation of a local recurrent neuron network. Activation can drive subnetworks to emit a sequential pattern of neural activity. This temporal activity pattern is thought to correspond to a remembered temporal sequence of events.

However, a relatively stable bump attractor does not appear to be compatible with the encoding of a sequence of encounter events. Detailed analyses of the biophysical properties of DL neurons summarized below suggest a solution to this apparent dilemma.

We characterized the biophysical characteristics of DL neurons with in vitro intracellular recordings in brain slices. We verified that our conclusions will be applicable to at least two teleost fish species previously shown to have excellent spatial memory: Apteronotus albifrons (nocturnal, a weakly electric fish that forages in the dark) and goldfish, Carassius auratus (diurnal, with vision guiding foraging).

A critical question was whether the physiology of DL neurons is similar in both species.

Our recordings showed that most DL neurons of both species are “silent.” This means their RMP is nearly noise free and they do not emit spontaneous spikes. We also found that these neurons have a low resting membrane potential and a high spike initiation threshold and have a prominent after-hyperpolarizing potential (AHP) following each spike. As a consequence, DL cells respond to direct somatic current injections with a small number of spikes (<10) emitted at a low frequency (< 20 Hz). They cannot sustain a high spike firing rate.

In addition, we found that a small subset of DL neurons was spontaneously active due to local synaptic input. This finding is consistent with the DL network’s being able to intrinsically generate sustained activity.

Our recordings revealed that DL neurons exhibit an asymmetric response to positive and negative current injections. Our pharmacological interventions suggested this is due to their expression of a G-protein inward rectifying potassium (GIRK) channel that is likely the reason for the low RMP of DL neurons. Additional pharmacological studies demonstrated that DL cells have high threshold Ca2+ channels linked to the SK channels responsible for their AHP.

Importantly, we demonstrated that DL neurons display a dynamic spike threshold, such that each action potential raises the spike threshold so the initiation of an action potential depends on the neuron’s previous history. Using a computational model, we further suggested this feature is caused by the slow recovery from inactivation of Na+ channels.

Based on their biophysics, we predict DL neurons will have low basal activity in vivo and respond with only a few spikes to their thalamic input — i.e., that they are “sparse coders” of spatial and other memories.

DL neurons receive information from the thalamus that could lead to an estimate of the time between object encounters (e.g., with landmarks or prey). Input from thalamic neurons (lateral line) may also provide a speed signal that converts time to spatial intervals.

Theoretical analyses have suggested hippocampal “time cells” are generated when a bump attractor is destabilized by a dynamic threshold. The resulting moving bump was proposed to encode the time taken between object encounters. We hypothesize that the dynamic threshold present in DL neurons can fulfill this role, and that temporal and spatial information is computed by sparse activity propagating through the DL network that encodes the time and distance intervals between encounter events.

Leonard Maler, PhD
Leonard Maler is a distinguished professor in the Department of Cellular and Molecular Medicine at the University of Ottawa.
﻿