The Art of Experimental Design and Science Outreach 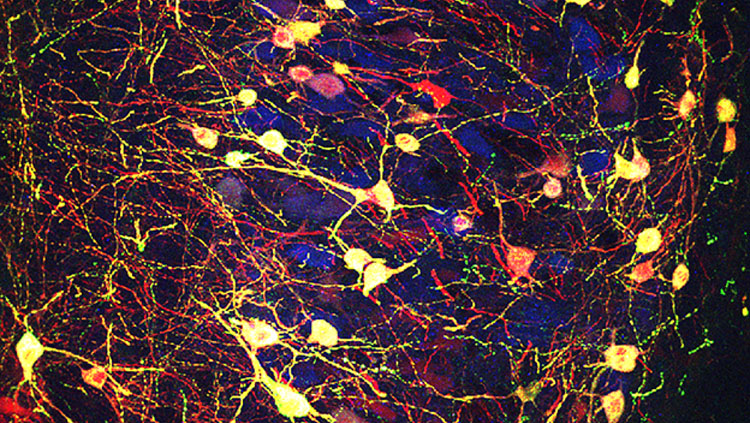 Imposing a Neurotransmitter Switch
A group of midbrain neurons expressing acetylcholine (blue) are made to express another type of neurotransmitter, glutamate (green), using adeno-associated virus as a gene delivery platform. The neurons targeted by the virus also express a red fluorescent protein for identification and thus appear a light-yellow color (green plus red and blue).

Huiquan Li is an assistant project scientist in the Spitzer Lab at the University of California, San Diego, where she studies neurotransmitter plasticity in the adult mouse brain and has worked since completing her graduate studies in China.

Talented in strategizing how to get complex experiments to work and passionate about sharing neuroscience with anyone, in this interview she shares her advice for designing beautiful experiments. She also shares two anecdotes demonstrating that one-on-one interactions can improve individual lives while at the same time increasing understanding of the relevance of neuroscience to everyone.

This interview is a complement to SfN's podcast series, History of SfN: 50th Anniversary. Guests on the podcast were asked to nominate individuals whose careers are making positive cultural or scientific impacts that will shape the next 50 years of neuroscience. Huiquan Li was nominated by Nick Spitzer, Atkinson Family Chair Distinguished Professor of Biological Sciences at University of California, San Diego.

What are your scientific interests?

Curiosity is part of what makes us human, and like many scientists, I am a highly curious person. I pursued a career in science for the feeling of making discoveries. Sharing what I’ve discovered with my peers and the public is also deeply rewarding.

I received my PhD from the Institute of Neuroscience, in the Chinese Academy of Sciences. As a graduate student, I studied microglial cells, which are the brain’s immune cells. Then I heard a lecture by Nick Spitzer about transmitter switching. I became fascinated with knowing how neurons cope with environmental stress.

The fact that neurons can change their transmitters challenged the textbook knowledge that neurotransmitter identity is fixed throughout a neuron’s life. I wanted to know more, and I joined the Spitzer Lab in 2014 to pursue answers to these questions.

What inspires your research questions, and what have you found?

We previously linked a decreased number of dopaminergic neurons to behaviors characteristic of anxiety and depression. It was a nicely shown correlation that suggested transmitter switching occurs in the adult brain and regulates behavior.

We used a transgenic mouse model in which we could permanently label the cells that were going to switch with a genetic marker and then examine whether the gained transmitter was colocalized with the marker. This also enabled us to discover that the original transmitter was lost in cells identified by the marker. To study the causal relationship between the transmitter switch and behavior, we restored the transmitter synthetic enzyme that the switching neurons lost and prevented expression of the transmitter synthetic enzyme that they expected to gain, also using transgenic tools. In this way, we were able to demonstrate the single-cell switch and its causality with respect to behavioral alterations, published in Nature Communications.

That was groundbreaking because it allowed us to understand a previously under-appreciated form of neuroplasticity and its impact on neural circuit function. It has also sparked new thinking about developing therapeutic tools to treat motor disorders, like ataxia or Parkinson’s disease.

What are you researching now?

I’ve extended my research from healthy brains to brains with mental illness. So far, I’ve found that glutamatergic neurons in the dorsal raphe nucleus, a brain region that plays a critical role in fear disorders, switch to become GABAergic neurons in stressed animals. The switch is correlated with an increase in sustained fear response, which is one of the key symptoms in a spectrum of fear disorders such as PTSD.

I’m hoping that my study can be useful for developing new therapeutic tools for treating and preventing such disorders.

1. Before starting an experiment, I always think hard about whether that experiment is the best one to test the hypothesis.
The ideal experiment will reveal new knowledge, whether the results are positive or negative. I try hard to design this kind of experiment, one in which you don’t know what the outcome will be but the findings will be interesting, either way; however, it’s not always possible to do, because scientists don’t have unlimited tools.

When that’s not possible, I aim to design an experiment in which the results will be useful if they’re what you’d expect. At all costs, I try not to design experiments that, no matter the outcome, will allow you to draw only vague conclusions.

2. It's also helpful to understand the big picture of all of the experiments you'll have to run before you start.
Some experiments can be combined, saving time and resources, like test subjects and reagents. Some experiments can be done in parallel, and some have to be done only after the others have been completed. Keeping all of that in mind is helpful for managing your time.

3. Finally, I do a lot of preparatory work to make sure the experiment runs smoothly.
For a complicated experiment, making sure each small piece is working is key to making the whole experiment work. For example, I often do pre-tests so that when I start the real experiment, I can be confident that all of the components will work and allow me to successfully conduct the experiment.

Why is science outreach important to you?

Sharing how our research benefits society and public health will strengthen the public’s confidence in us and lead to positive feedback in the long run.

Often, it’s the personal connections you form with people that make a difference in their lives and can also inspire you to keep going when the work is hard.

When I was a graduate student in China, I once took a 24-hour train ride back to my hometown. During the journey I met a senior couple, both of whom looked sad. The wife had been diagnosed with depression and her husband was trying to convince her to take medication, but he didn’t know how to help.

When I told them I study neuroscience, he immediately thought of me as “an expert,” someone who could explain what his wife was experiencing. When we know more about something, it is less mysterious and scary.

I explained what causes depression, which brain regions are involved, and how the medication would work. I still remember their laughter during that conversation and how, at the end of the trip, the wife said she already felt better and was willing to take the therapies.

Another time, on a train ride from San Diego to Los Angeles, I met a middle-aged woman who had ataxia, a motor coordination disorder. She sat next to me and after a few words became excited to know that I am a neuroscientist working on motor function.

She told me that doing physical exercise relieved her symptoms, but she didn’t know why. I shared my recent research about the mechanism by which physical exercise benefits our brain and how neurons change their chemical communication signs to regulate it. She was happy to have an explanation for her personal experience, and it gave her another reason to continue exercising.

In each conversation, both the people I talked to and I benefited. Now whenever I’m puzzled, stressed, or disappointed by an experiment that doesn’t work, a paper that has been rejected, or a grant proposal that wasn’t funded, I think back to those reminders that my research helps people, and that drives me forward.

What are your hopes for the future of neuroscience research and the field?

Transmitter switching in neurons is matched with changes in postsynaptic receptors, so the dynamic expression of glial transmitter receptors makes me wonder whether glia adapt to switches in neurotransmitters or whether gliotransmitters also switch. These ideas were included in a recent viewpoint article in JNeurosci.

I hope more and more scientists will take the time to share their research with the public. I think a conversation between two humans can be more vivid and often more impactful than media coverage or social media for sharing scientific knowledge.

Any chance you have, whether a reunion with relatives, a party with friends, or travel sitting next to a stranger, please share how research works and how a scientific discovery is made.

Huiquan Li, PhD
Huiquan Li is an assistant project scientist at the University of California, San Diego, where she also completed her postdoc. Li’s main research interests lie in neurotransmitter plasticity. She received her bachelor’s degree in biotechnology from Zhejiang University and her PhD in neuroscience from Institute of Neuroscience, Chinese Academy of Sciences. She is particularly interested in neurotransmitter plasticity. She has been working with Nick Spitzer at UCSD since she graduated from the Institute of Neuroscience, CAS. Using transgenic mouse lines and gene transfer tools, she has shown that chronic running drives a transmitter switch from acetylcholine to GABA in midbrain cholinergic neurons of adult mice that is necessary for running-enhanced motor skill learning (Li & Spitzer, Nat Commun., 2020). Li is now investigating the role of transmitter plasticity in fear disorders and have found that traumatic stress causes a transmitter switch from glutamate to GABA in the dorsal raphe of adult mice. Her short-term goal is to explore the molecular and circuit mechanisms underlying how environmental changes trigger neurotransmitter switching and how neurotransmitter switches regulate behavior to adapt to the ever-changing environment. Glia - not neurons - are the most abundant cells in the brain and are intimately associated with neurons. Her long-term goal is to study the role of glial cells in regulating neurotransmitter switching and identify whether gliotransmitter occurs in the glial cells themselves (Li et al., J Neurosci., 2020).
﻿
MORE
4 of 5 articles left
Login or Become a Member to unlock content