Teaching Children About the Brain Using the World Around You 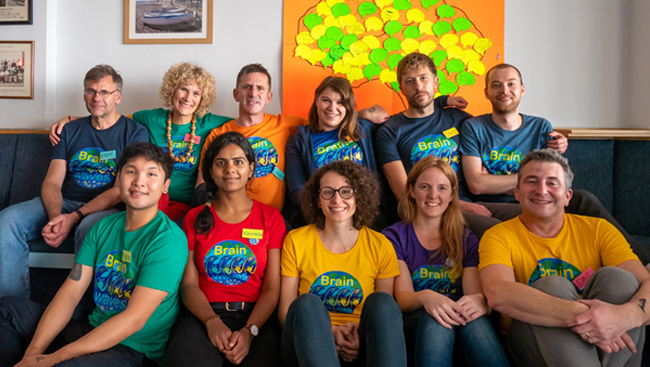 The following example of finding creative ways to do outreach uses the environment as a classroom to teach children about the brain. Richard Wingate and Leigh Wilson, from King’s College London, share how they planned fun and instructional lessons and offer inspiration for how you can do the same.

When you communicate brain science, have you considered how you can use the world around you to enhance impact? What does neuroscience look like in a forest, in an urban playground, or on the beach?

We’ve been developing a reflexive approach to neuroscience outreach by using the resources we encounter in different environments to teach children about the brain. Using your imagination and the tools at hand, you can turn almost any environment into a classroom, where the lessons are always fresh and exciting.

Introduction to The Event, Brainwaves

Brainwaves was a one-day seashore-based neuroscience adventure conducted at the Sidmouth Science Festival in Devon, United Kingdom in October 2018. The science festival is one of a number of community-led festivals in the United Kingdom.

There were 65 children, aged 8–9. Twelve neuroscientists, ranging from PhD candidates to principal investigators, designed and delivered the workshop. We recruited three local schools as participants to bring together children with different educational experiences.

We used the fabric of the seashore — pebbles, tidal creatures, buckets and spades, and the terrain — to explore the structure of a neuron, how signals pass along cells, and how brain cells build connected networks. We explicitly wanted to use what we found on the beach and in rock pools to illustrate these concepts and show that connections to neuroscience are all around us.

It was important to us to give the children a chance to build brain cell networks and simulate neural activity. By dividing the children into teams, each led by a scientist, we gave each participant a chance to ask questions and explore together.

Before the session, we collected local fauna and beach resources. To explain comparative neuroanatomy, we used limpets, shrimp, crab, and fish from rock pools. To explain nerve conduction and how synapses work, we held bucket-and-water races. We also constructed neurons out of pebbles from the beach and invested in four giant rolls of paper and enough pens and pipe-cleaners to give children space and resources to draw and build.

We divided the workshop into several activities:

We wanted the children to be able to understand:

While taking neuroscience into the classroom can involve bringing part of the laboratory with us, our workshop has shown the outside world is also a resource that can engage the creativity and imagination of children and scientists.

Teachers told us they loved seeing the students excited to learn about the brain. The students also clearly enjoyed the activities. “My two favorite parts were making the nerve cells and the balloon race! I learned each animal has a different nervous system,” one student said.

Brainwaves offered a new approach to the team-building goals of a “lab retreat” that involved giving back to the community. We see Brainwaves as a first foray using this approach and hope to repeat it in new environments generating fresh ideas.

Richard Wingate, PhD
Richard Wingate is a principal investigator at the MRC Center for Neurodevelopmental Disorders, King’s College London, and the incoming editor-in-chief of BrainFacts.org.