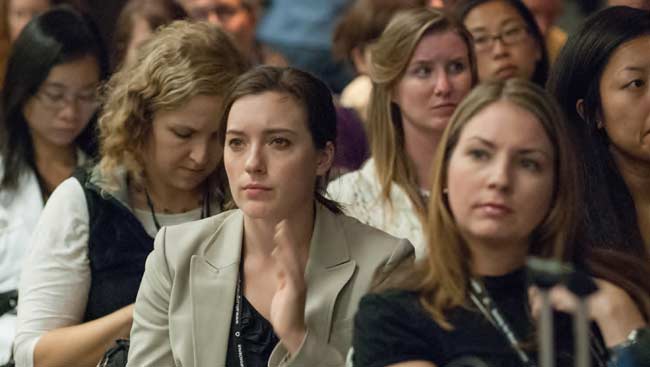 Progress in neuroscience requires the talent and expertise of all researchers, regardless of their gender, race, or national origins. Yet progress for women in the sciences, including neuroscience, is still slowed by personal, institutional, and cultural gender biases, often unconscious ones, as researchers now know.

When it comes to making progress for women in neuroscience, there is reason for both optimism and concern, and the data bear this out. On one hand, the number of women in PhD programs has increased significantly. Women now outnumber men in many graduate and medical schools. In neuroscience, the number of women receiving PhDs has risen to around 55 percent of the total population. What's more, nearly half of the membership of the Society for Neuroscience is female.

However, women's representation in the field diminishes at every career transition. A 2011 survey of neuroscience departments and programs found that only 29 percent of tenure-track faculty and only 24 percent of full professors are women — little change since 2000. Further, SfN’s recent membership survey revealed that fewer than one in five department chairs are women.

Over the last decade, the issue of implicit bias — the often-subtle discrimination based on cultural stereotypes — has emerged from research as a driving force in gender disparity, going beyond earlier hypotheses from past research that suggested “lifestyle choices” were the dominant cause.  Implicit bias stereotypes downplay women's competence while emphasizing their likeability and caretaking abilities. Furthermore, implicit bias is often unconscious, making it difficult to uncover.

A recent study published in the proceedings of the National Academies of Science aimed to unmask this problem of implicit bias. Researchers at Northwestern University sought to tease out whether implicit bias contributes to gender disparity. The study is among the first to specifically test for gender bias within academic science.

To assess whether faculty members in the sciences held gender bias, the team designed materials for applicants for a lab manager position. The materials were identical except for one key variable: half were given a female name and the other half a male name. The materials were sent to 127 faculty members, who assessed the applicant's competence and desirability as an employee and made recommendations about salary and mentoring.

The results were clear: For every variable, gender made a difference. The packet with the male name was viewed as more competent and a better candidate for the job. The male candidate was offered a higher salary and more mentoring than the female candidate. Importantly, these findings were true for both the male and female faculty members who were reviewing the applications. As it turns out, women are not immune to gender bias.

After more in-depth examination of the findings, the research team concluded that the faculty's preferences are subtle, based on preexisting gender biases reinforced by cultural stereotypes. In this study, the impact of bias meant that the female candidate was not selected for the job. But the study's researchers hypothesized that the findings may have implications for other parts of the career pipeline. For example, do negative experiences at the postdoctoral level determine women's decisions about staying in the field? Do women receive less encouragement from faculty, undermining their confidence and ambition?

A 2003 study conducted by researchers from Wayne State University addressed some of these concerns. The researchers examined more than 300 letters of recommendation for a faculty position at a medical school, looking for signs of bias. In subtle but damaging ways, the letters for women were significantly weaker than those for men. While women were described as “thoughtful” and “considerate,” the men were" intelligent" and "productive.” Applicants' titles, such as clinical assistant professor, tended to be used more for men; for women, disparaging terms such as “lady physician” were used instead. Across the board, the letters for females contained more negative language, hedges, faint praise, and irrelevant asides than those for men.

Similarly, in a 2007 study, University of Arizona researchers found that letters of recommendation for male applicants for chemistry and biochemistry faculty positions used more standout adjectives, such as “superb” and “remarkable,” coupled with more language implying natural ability, as opposed to grindstone adjectives, such as "hard-working" and "conscientious," which were more commonly used for women applicants. The net effect made a subtle case for men having more natural ability than women. That said, however, the researchers state that more research needs to be done to deepen the understanding of this issue.

Given research findings that increasingly point to the role of implicit bias in the sciences, many organizations are working to address the problem head-on. In 2010, SfN launched the Department Chair Training to Increase Women in Neuroscience (IWiN) project to tackle these issues within the neuroscience community, with generous funding from NSF’s ADVANCE Program for Increasing the Participation and Advancement of Women in Academic Science and Engineering Careers. Through the project, participants examined the research, discussed strategies, and developed plans to implement at their home institutions.  Read more about the IWiN Project »

Many ideas emerged from these workshops, including successful strategies to limit the role that implicit bias plays in recruitment, hiring, and promotion within academia. In addition, climate issues on campuses that affect retention of women faculty will be addressed, with suggestions on how to create a culture of equity.  Look for future articles on SfN.org with more information and details about these topics.

Identifying bias and formulating strategies to overcome it is not only about helping women progress in the sciences. Doing so is part of a multi-pronged strategy to ensure that all the best and the brightest join, and remain a part of, the scientific enterprise. Given the challenges and opportunities in brain research, a diversity of ideas and creative approaches are needed now more than ever. New research into implicit bias suggests that making a diversity of ideas a reality will involve personal, institutional, and cultural changes across the sciences.