My Advice for Running a Lab Where Trainees Feel Empowered 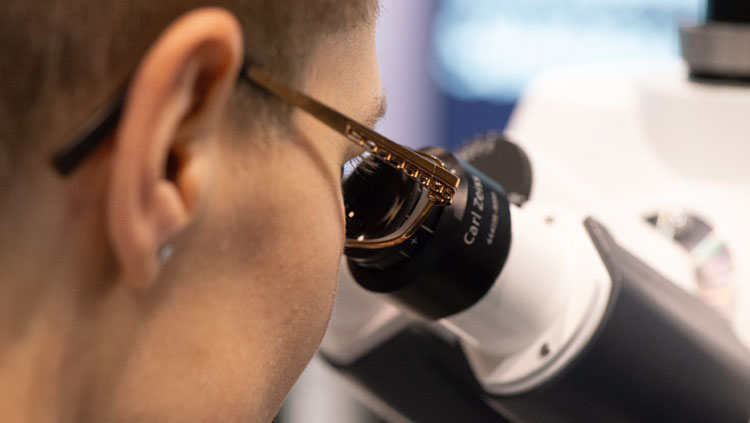 As new faculty at the Princeton Neuroscience Institute, Annegret Falkner is also new to managing a lab. In this interview, she shares who and what has defined her approach to running the Falkner Lab, her advice for empowering curiosity and decision-making in trainees, and the rewards of coaching others as a PI.

This interview is a complement to SfN’s podcast series, History of SfN: 50th Anniversary. Guests on the podcast were asked to nominate individuals whose careers are making positive cultural or scientific impacts that will shape the next 50 years of neuroscience. Annegret Falkner was nominated by Mickey Goldberg, David Mahoney Professor of Brain and Behavior at Columbia University.

Can you walk us through your scientific career to date?

I was interested in systems neuroscience, at first. My focus shifted when I attended a talk by David Anderson on aggression. There aren't many talks that change the trajectory of your career, but that one made me think, "This is it."

In graduate school, I had worked in attention-based decision-making, looking at the neural correlates of distractor filtering in primates, but the lure of mouse genetic tools was too great to resist. It seemed crazy to me that you could stimulate tiny populations of neurons at the bottom of the brain and get these really complex behaviors. It seemed a space that, given a little bit of systems-level inquiry, you could make progress in.

So during my postdoc, I brought my interests in systems neuroscience and decision-making together to define a specific question, which is how do these subcortical areas organize complex behavior? How do they make moment-to-moment decisions about which social behaviors we do?

This is your second year on the faculty at Princeton. What has been your experience as new faculty? How do your responsibilities as a PI differ from those you had as a postdoc?

It's a lot of people and projects to manage, but I love the people here. I got really lucky in that I was able to recruit a couple of extremely talented students and a great lab manager right away.

When you're a postdoc, your job is to hyper-focus on one thing all the time and to produce and interpret high-quality data. When you're a PI, you’re making decisions, small and large, all day long. At first that was a little overwhelming, but I'm more used to it now.

Especially as a new PI, most of your job is making decisions about purchasing and hiring and trying to lay the tracks for each project.

How would you describe your approach to running a lab?

I run my lab the way I have enjoyed being coached, which is mostly hands-off. I have standing meetings, but I'm still running experiments myself. I'm in the lab often, so students can catch me whenever they need me. My job with most projects is to figure out where the problems are, try to remove them, and make sure people have the tools and guidance they need.

What challenges have you run into as a new PI and how have you handled them?

One is that some students have different working hours. I’ve started creating internal working groups within the lab to give students other points of contact, so they don’t feel like they have to be in the lab when I am. It allows them flexibility while maintaining support.

Then, for people who are very competent, you have to tailor the amount of oversight for different pieces of a project. But my rule of thumb is to never get too far away from the raw data in any project.

Every person in a lab needs something different. On top of that, every project is different. I have a system where, after we meet, students compile slides about the data and write a summary of what we talked about and what they're hoping to do for the next two weeks.

I'm still trying to find the happy medium between too much and too little oversight, but this will be an ongoing process, and every person in a lab needs something different. On top of that, every project is different. The speeds at which projects develop are different. Even data collection streams are different. You have to wait for the project to take shape.

Who are your mentors?

Ilana Witten, at Princeton, has been a huge influence on me. It's inspiring for me to see how happy her people are and how cool all of the projects are. Her work is the closest to what my lab does, technically, so we can use a lot of the same mentoring strategies.

Honestly, the best mentorship I'm getting right now is through the PIs I'm collaborating with — my peers. It's been a phenomenally fortunate experience for me. I get an inside look at how other people manage, because everyone does it differently.

What do you like most about running your own lab?

I genuinely like all of the people in my lab, and I like interacting with them. In a lot of ways, I get to share in all of the successes, even as a PI.

When you're a postdoc, there are low lows and high highs, because you're incredibly invested when an experiment works or doesn't, In a lot of ways, I get to share in all of the successes, even as a PI.and that translates to my role as a PI and mentor since you’re juggling many projects simultaneously. I get to say, "Yay! This works," but then move on to the next person where I may have to say, "Oh, this isn't working at all." And this can happen a lot within the same day.

My role is to try to help people move on quickly. That’s one of the benefits of working in mice, where the trajectory of most experiments is fast. You can just try things, even ones you think are going to be wrong, because you can pivot quickly, and sometimes they may end up working.

Why is creating a positive lab environment important to you?

The one accomplishment I'm most proud of is that I think I've made a good dynamic in the lab, where people feel comfortable and safe asking questions and pursuing their own agenda within the larger goals of the project. You want your trainees to feel like they have somebody who is excited with them for the project and for the outcome. I hope that people feel intellectually satisfied with their projects.

Annegret Falkner, PhD
Annegret Falkner is an assistant professor of neuroscience at the Princeton Neuroscience Institute. She earned her PhD from Columbia University, and her research focuses on neural circuits for social decision-making.
﻿
MORE
4 of 5 articles left
Login or Become a Member to unlock content