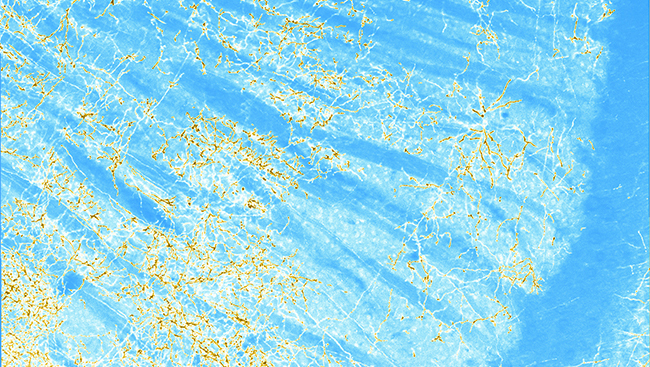 The neurons of the superior paraolivary nucleus (SPN) in the auditory brainstem of rodents embody the polar opposite. They receive predominantly inhibitory inputs. It has been shown that SPN neurons rely on strong inhibition to fire action potentials, by rebounding from hyperpolarization. This raises the question of what the role of excitation is in these neurons.

The SPN receives its dominant inhibitory input from the glycinergic medial nucleus of the trapezoid body (MNTB). In vivo recordings show the MNTB fires action potentials during the entire duration of a sound stimulus and essentially inhibits SPN neurons during the sound stimulation. At the end of the sound stimulus, SPN neurons rebound from the aforementioned inhibition to fire action potentials, referred to as offset firing (firing at the offset of sound).

However, in addition to firing at the sound offset, some SPN neurons fire at the beginning of the sound stimulus, referred to as onset firing. This onset firing pattern is reflected by the octopus cells of the posterior ventral cochlear nucleus (PVCN), one source of excitation to SPN neurons.

While characteristic frequency and the sound intensity threshold of the two groups of neurons did not vary, the latency of the offset response was significantly shorter in the ON-OFF group, which received more excitation.

We used in vitro whole cell recording and immuno-histochemistry to study the synaptic inputs to the SPN. The evidence does not support an anatomical distinction between the two cell populations. We also observed the inhibitory input outweighs the excitation by a factor of ten.

In addition to Alpha-amino 3-hydroxy-5-methyl-4-isoxazolepropionic acid (AMPA) receptors, SPN neurons expressed N-Methy-D-aspartate (NMDA) receptors. The slow NMDA current did not depress as much as the inhibitory or AMPA currents, when a train of pulses at 100 Hz was used to stimulate the afferent inputs. This slow excitatory current at the end of a sound stimulus, with moderate depression, could help boost the rebound offset response at the end of inhibition.