How Does This Postdoc Approach Advocacy? Putting His Audience First, In Unexpected Ways 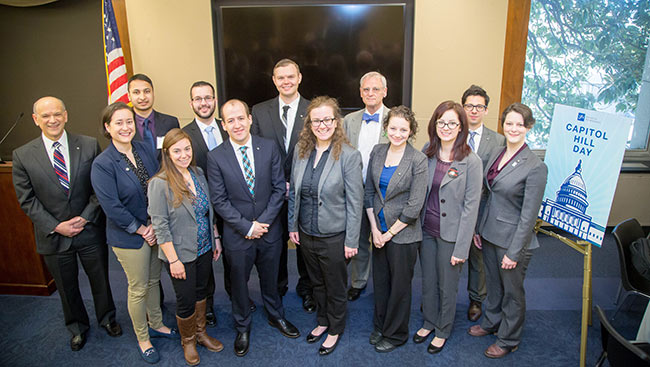 When Michael Wells attended SfN's 2017 Hill Day to advocate for federal funding of biomedical research, his reach went far beyond the Capitol. In between meetings with lawmakers, he also facilitated an engaging, personal conversation on mental health through the band Passion Pit’s Twitter handle. Throughout the year, Wells also makes it a priority to communicate how advances in scientific research connect to the human experience. Here, he shares what he’s learned about the importance of audience-first communication online and in-person.

Why is science advocacy and communicating about science with the public important to you?

I grew up in a small suburb of Columbus, Ohio in a blue-collar neighborhood. Growing up, I heard many disgruntled conversations about how our hard-earned tax dollars are spent. It’s important to me that biomedical research never makes its way into this debate. To protect science, we must protect our standing with the general public by effectively communicating the purpose and importance of our research.

You attended SfN’s 2017 Hill Day as an Early Career Policy Ambassador. Besides advocating for science in-person with lawmakers and their staff, that day you also took over the band Passion Pit's Twitter handle to discuss important funding and mental health with the public online. How did this come about?

This opportunity started with a simple act of science outreach on Facebook just a few weeks prior. My friend had posted a news article about the efforts of Passion Pit’s lead singer, Michael Angelakos, to help musicians struggling with mental health issues. He was diagnosed with bipolar disorder a decade ago.

I responded with a short comment explaining the current state of psychiatric disease research. Much to my surprise, Michael replied to me. We began discussing the efficacy of different treatment options for bipolar disorder and how scientists are working hard to research improvements. I then invited Michael to my lab at Harvard, and the next day he was on a plane from New York to Boston.

During his lab visit, I showed Michael human stem cell-derived neurons and cerebral organoids. Even though he discussed live brain cells plenty of times with his doctors, he had never seen them. He was visibly moved by this experience and considers it to be life-changing.

Since that visit, Michael and I have regularly been in contact to brainstorm ways to engage the public about scientific research, especially pertaining to mental health. When I told him that I’d be in Washington, D.C., for SfN’s Hill Day, Michael offered to hand over his Twitter handle so I could converse directly with his 230,000 followers.

In between meetings with congressional aides, I tweeted with his followers about the importance of government support for basic research. I also asked them to share personal stories about how mental illness impacts their lives. To encourage their participation, Michael offered to send a free digital copy of his new album, Tremendous Sea of Love, to anyone who used the hashtag #weneedscience.

This Twitter takeover was a huge success. Thousands of people joined a much-needed, open discussion about mental illness, and the event was even covered by Entertainment Weekly, Pitchfork Media, and Spin Magazine.

What elements of your outreach approach do you think made your takeover successful?

Most importantly, we made Passion Pit fans part of the narrative instead of regurgitating facts that supported our agenda. By taking this “audience-first” approach (which is the hallmark of Passion Pit’s live performances), we showed that personalizing our science communication can amplify our message.

Engaging the public online in this way also enabled the other participating scientists and me to reach a large international audience, including teenagers who may be unaware that the government helps to fund biomedical research. I’m hoping that our conversation contributed to the building of a strong foundation of the next generation of science advocates, and even scientists. I received an outpouring of direct messages from people saying that our Twitter conversation inspired them to want to pursue research careers.

Our conversation was also notably more open and less formal because of the unadvertised, impromptu nature of the chat, which encouraged participants to be more engaged and less inhibited despite the personal subject matter.

People from all over shared highly personal stories about mental health, and you and other neuroscientists responded compassionately while also explaining scientific concepts and the big picture importance of advocating for more funding. How can — and why should — scientists have these types of personal conversations in their daily lives?

We can’t rely on celebrities to champion our cause — we have to do that ourselves. There are many ways to be our own advocates, but there are two methods that I have found to be effective.

First, I believe that every scientist — regardless of level — should have a social media presence. If you’re already active on social media, I encourage you to communicate with the public rather than just other scientists. Move beyond jargon-filled tweets aimed at a handful of people in one particular field of study. Simplifying our language gives our message the potential to reach a larger audience online and can teach us better ways to communicate our science in real life.

Second, think creatively about when to discuss your science. For example, I regularly use ride-share apps and use my time in the ride as an opportunity to share my work with nonscientists. I’m able to apply the techniques I’ve learned from my online interactions to talk about my science in an understandable way. I have yet to have an unpleasant interaction, and most drivers even end up thanking me for teaching them something new.

Do you have any last takeaways from your Twitter takeover experience?

There has never been a more important time to improve our science communication skills. Even if it’s just one conversation, we should all make an effort to step away from the sidelines and share our work.

Michael Wells, PhD
Michael F. Wells is a postdoctoral fellow at the Broad Institute of MIT and Harvard and serves on SfN’s Trainee Advisory Committee. He is currently generating and characterizing human induced pluripotent stem cell models of psychiatric disease and has a passion for scientific policy and communication. He previously served as a SfN Early Career Policy Ambassador. Wells also runs ReclamationSci.com, where authors can post original science communication pieces and receive feedback on the accuracy and clarity of their writing from scientists and the general public. ReclamationSci then works with corporate partners to publish certain pieces in mainstream media outlets.
﻿
MORE
4 of 5 articles left
Login or Become a Member to unlock content