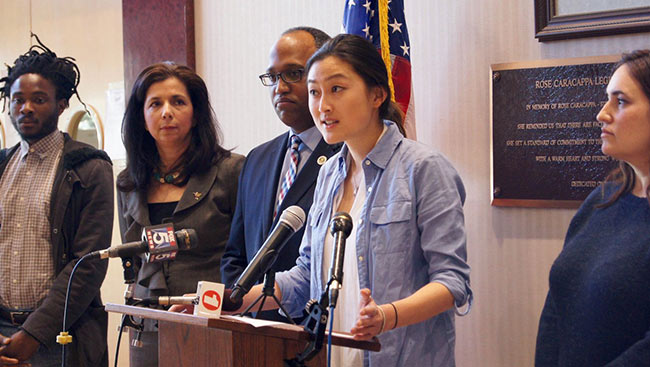 This past April, I proudly marched in Washington, DC, with 100,000 fellow scientists and nonscientists to show our support for the role of science in policy-making. The March for Science was a bit of an anomaly for the scientific community. While we hope that our research will have a positive impact on society, we don’t always raise our voices when we need to. But now more than ever, I believe it’s critical for scientists to actively engage in policy issues.

Last year, my colleagues and I founded a group of neuroscientists and psychologists called the Scientist Action and Advocacy Network (ScAAN). Our goal is to connect scientists with social change organizations because we realized that scientists’ research and analytical skills could be useful to nonscientific organizations. So far, we’ve seen positive results from our partnerships with organizations focusing on raising the age of criminal responsibility and limiting solitary confinement.

Raising the Age of Criminal Responsibility

Our first partnership was with Raise the Age NY, which has been campaigning to raise the age of criminal responsibility in New York from 16 to 18 years old. Until recently, New York was one of only two states whose criminal justice system treated all 16- and 17-year-olds as adults and put them through adult courts and adult prisons. ScAAN compiled a short literature review of research showing that the adolescent brain is not yet fully developed and that treating adolescent offenders as adults may be counterproductive. Our goal was to create a document that Raise the Age NY could use in its communications with the public and lawmakers to clearly and quickly illustrate the scientific support for their positions.

A few weeks after we released our review, a bill raising the age of criminal responsibility passed through the New York State Legislature and was signed into law. Raise the Age NY had been campaigning for this bill for years before we joined, but we were nonetheless proud to have played a role — no matter how small — in this victory.

We are also partnering with the New York Campaign for Alternatives to Isolated Confinement and Solitary Watch, two organizations that are working to limit the largely unregulated use of solitary confinement. In the United States, tens of thousands of prisoners are confined in cells half the size of a parking space for 22-24 hours a day, for up to decades at a time. This violates United Nations recommendations on the treatment of prisoners, which limit the use of solitary confinement and prohibit its use for more than 15 consecutive days.

It’s been rewarding to collaborate with other scientists who are motivated to engage in activism and advocacy. Members of ScAAN want to harness this energy and use our scientific skills to promote evidence-based social change.

I have two pieces of advice for anyone who wants to organize with their scientific colleagues.

Although the March for Science was a powerful way for scientists to make our voices heard, public demonstrations aren’t the only way to enhance the role of science in society. Scientists can directly advance the social change that we wish to see. ScAAN has done this through partnership with pre-existing organizations, but you may develop a different model that is more effective for your community and goals.

Will Adler
Will Adler is a PhD student at New York University and founder of the Scientist Action and Advocacy Network.
﻿
MORE
4 of 5 articles left
Login or Become a Member to unlock content